When Will The Bubble End? I Wouldn’t Put My Money On ‘Soon’ And This Is Why…

Everytime you hear the optimists speak about a turn in the economy being just around the corner, you hear of things like the tax rebate checks, or some statistic trying to show that housing isn’t as bad as it really is, or the fact that unemployment and GDP growth aren’t as bad as they could be.

But the truth is that you still have to ask a few basic questions.

There are several strands to the market’s optimism about an early V-shaped economic recovery. Among these is the fact that, while certainly not good, the various US macroeconomic indicators, like GDP growth and employment, for the first quarter of the year were not nearly as bad as the Cassandras had led us to fear.

Valid as these arguments might be, they totally overlook the fact that the US economy is still being adversely impacted by the very same three negative shocks that caused the US economy to go into a funk in the first place. Worse still, it would appear that at least some of these adverse shocks are now intensifying.

What are those three negative shocks?

Are US house prices at the national level now not declining at an accelerating pace in a manner that has no precedent in the past seventy years?

Have not international oil prices dramatically risen to around US $125 a barrel, or approximately double the level that they were a year ago, thereby more than offsetting the US government’s tax rebate program?

And is the US financial system not still in the throes of what Paul Volcker has referred to as the “mother of all credit crises”, as vividly illustrated by the Federal Reserve’s recent still very gloomy survey of bank lending intentions?

END_OF_DOCUMENT_TOKEN_TO_BE_REPLACED

This kind of had me doing a double take at the title. I’ve always heard of “vacationing in The Hamptons”, but this really brings that point home. Looks like soon, that’s all some folks will be able to do!

Homeowners in the some of the toniest ZIP codes in the Hamptons are facing a frightening reality - they can’t afford to foot the bill for their high-priced homes, The Post has learned.

In the first three months of this year, banks have launched preliminary foreclosure actions - known as lis pendens proceedings - against a record 120 borrowers in East Hampton and Southampton towns.

Twenty percent of those borrowers live in homes that are worth more than $1 million, according to figures from the Suffolk County clerk.

“This problem didn’t even exist before,” said John Brady, a broker with Coldwell Banker in East Hampton. “They used to pop up once in a while, and you wouldn’t even pay attention. Now you expect to see new ones every week.”

A total of 10 East End homes, including a massive Westhampton mansion, were foreclosed outright since the beginning of the year.

In addition, more than 800 East End homeowners - a mix of rich and middle-class people from Riverhead to Montauk - have been flagged by credit-monitoring companies this year for late payments.

Brady said the high-end, delinquent borrowers are finance types, lawyers and speculators who overextended themselves on second homes and investment properties.

END_OF_DOCUMENT_TOKEN_TO_BE_REPLACED

The finance industry continues to suffer losses and as a result, it seems that some forecasting has shown it’s time to trim the fat where it can still be trimmed.

JPMorgan Chase on Tuesday said it plans to transfer 420 customer-service jobs from the Valley to locations outside Arizona as part of an ongoing workforce-efficiency drive.

Affected workers will be eligible for other jobs with Chase, which has 475 openings in Arizona in retail financial services and other areas. Those who don’t land new jobs with the company will receive severance packages.

Chase, the largest bank operating in Arizona based on deposits, counts about 9,000 workers in the state.

“We’re continually reviewing our business priorities looking for efficiency,” she said. Chase plans to transfer the jobs to Texas, Ohio, the Philippines, Missouri and Michigan - places where she said Chase has lower operating costs and excess capacity.

Chase plans to transfer the positions gradually through year-end and will give 60-day notices to affected workers, most of whom handle telephone calls from customers and perform account-maintenance and research work. The affected employees are among 2,000 workers at a Chase facility near Sky Harbor International Airport.

Efficiency. The most beautiful and horrible word all at once - depending on which side of it you’re on.

There were some colorful comments that seemed to hint at some more reasons behind this:

It’s hard to believe that Chase will have lower operating costs anywhere in the US. Arizona wages are so low, it must be almost the bottom. So I guess most of these jobs will go to the Philippines.

This is a hard blow to Arizona which needs these low level jobs urgently because of our failing schools turning out so many people who are not qualified for anything better.

“ongoing workforce-efficiency drive” in plain American English=kiss your jobs goodbye. Chase will pay $1.25 per day to Makmoud in the Philippines and put the labor cost savings in the executive’s year end bonus. Chase would hire illegal aliens for cheap if they could, at least the paychecks would stay in the Arizona economy.

YEAH MY SISTER IN LAW THAT WAS WORKING FOR CHASE SHE TOLD ME TODAY THAT THEY GOT NOTIFY THAT THEY WILL BE GETTING LAID OFF. SO NOW CHASE IS GETTING READY TO GO TO THE PHILLIPPINES AND INDIA. SO NOW WHEN PEOPLE CALL CHASE WE ARE HARDLY GOING TO UNDERSTAND IN WHAT THESE PEOPLE ARE SAYING. THANKS FOR NOTHING CHASE! SELL OUTS!!!!!!!!!!!!!!!!!!!!!

END_OF_DOCUMENT_TOKEN_TO_BE_REPLACED

Mortgage Delinquencies And Defaults On The Rise As Home Prices Fall

A crashing market is great for buyers who are eagerly waiting to chomp into their next home at a fantastic price. But it’s not so great for sellers who are left unable to sell at prices that let them break even with what they bought for. Seems to be a chicken vs egg question.

It’s a crushing feeling when you find the value of your house is less than what you paid for it. Even if you never took out a home equity loan, made payments as usual, and have a very valid reason to sell like a death in the family, loss of a job, etc.

Mortgage delinquencies will continue to rise over the next six to 12 months as home prices decline and economic conditions remain difficult, according to one forecast released Monday.

The index, which has increased over the last four quarterly reporting periods, is now 47% higher than it was in the first quarter of 2002 when the last recession was winding down.

END_OF_DOCUMENT_TOKEN_TO_BE_REPLACED

The Median Price For A Single-Family Home In The United States Drops 7.7 Percent - The Biggest Decline In At Least 29 Years 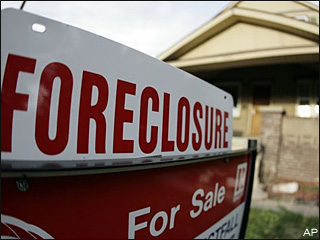 As the housing bubble continues to pop, we all get wet. Some end up stickier than others. Now that the hotter first quarter months are past, we’re seeing that the crash is continuing and that 2008 won’t be any better than 2007. To the contrary, it appears that it’s only going to get worse for those affected.

The median price for a single-family home in the U.S. dropped 7.7 percent in the first quarter, the biggest decline in at least 29 years, as values tumbled in two-thirds of U.S. cities, the National Association of Realtors said.

The median, the point at which half the homes sold for more and half for less, was $196,300, down from $212,600 a year ago, the largest decline in records going back to 1979. Sales of single-family houses and condominiums fell 22 percent to 4.95 million at an annualized pace, the slowest in a decade, the Chicago-based group said in separate reports today.

Homeowners who live near a house repossessed by a lender will see their property values drop an average of $5,000, according to the Center for Responsible Lending. Nationally, foreclosures will result in $202 billion of lost real estate value, the Durham, North Carolina-based group said.

There were 4.06 million U.S. homes for sale at the end of March, 40,000 more than the prior month, the Realtors association said in an April 22 report. At the current sales pace, that represented 9.9 months’ worth, up from 9.6 months’ worth at the end of February.

END_OF_DOCUMENT_TOKEN_TO_BE_REPLACED

Watch the latest videos on YouTube.com