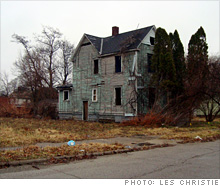 In some of the more broken down parts of the nation, many folks are suggesting that the eyesores that have resulted from owners long gone after sending in their “jingle mail” and walking away from their mortgages, be torn down or converted. Seems Youngstown is doing exactly that.

Youngstown, Ohio, has seen its population shrink by more than half over the past 40 years, leaving behind huge swaths of empty homes, streets and neighborhoods.

Now, in a radical move, the city – which has suffered since the steel industry left town and jobs dried up – is bulldozing abandoned buildings, tearing up blighted streets and converting entire blocks into open green spaces. More than 1,000 structures have been demolished so far.

Under the initiative, dubbed Plan 2010, city officials are also monitoring thinly-populated blocks. When only one or two occupied homes remain, the city offers incentives – up to $50,000 in grants – for those home owners to move, so that the entire area can be razed. The city will save by cutting back on services like garbage pick-ups and street lighting in deserted areas.

“We’re one of the first cities of significant size in the United States to embrace shrinkage,” said Williams.

It’s an odd way to pioneer. “The American narrative always includes growth,” said Hunter Morrison, Director of the Center for Urban and Regional Studies at Youngstown State University, which works closely with the city on plan 2010’s implementation. “No one wants to talk about shrinkage. That’s too threatening to politicians, civic boosters and Chambers of Commerce.”

The demolitions can yield stark contrasts. In many neighborhoods, blocks have more empty lots than buildings.

Ideally, all this energy surrounding 2010 will help turn the city around. It does have a lot going for it, including Youngstown State University, which attracts creative-class types like artists and writers and other intellectuals, as well as museums and an excellent public library.

The cheap residential and commercial real estate can be a draw. Start-up companies thrive on low overhead, and employees can easily find housing just minutes from work.

At the very least, the 2010 plan has changed residents’ perspective, said Hunter Morrison. “It’s getting us to think about where we’re going into the future, rather than where we’ve been in the past.”

Comments Off on Youngstown, Ohio’s Answer To The Foreclosure Crisis? Razing Abandoned Buildings And Tearing Up Streets (Visited 9863 times)