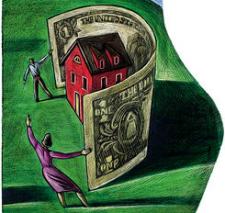 As we’ve seen the major banks start to fall apart or get bought by the government, we’ve been inundated with suggestions, opinions, and infighting between parties and ideologies.

However, what so many are forgetting about is that the crux of the issue regarding house pricing and the worth of derivatives based on home mortgages still revolves around one factor that is fixed and cannot easily change: Inventory.

If the goal is for house prices to stabilize so that folks so upside down on their homes they end up walking away will be able to stay in their homes, you won’t get there as long as there are empty homes littering every neighborhood out there.

If the plan works, it will attack the central cause of American economic distress: the continued plunge in housing prices. If banks resumed lending more liberally, mortgages would become more readily available. That would give more people the wherewithal to buy homes, lifting housing prices or at least preventing them from falling further. This would prevent more mortgage-linked investments from going bad, further easing the strain on banks. As a result, the current downward spiral would end and start heading up.

“It’s easy to forget amid all the fancy stuff — credit derivatives, swaps — that the root cause of all this is declining house prices,” Mr. Blinder [Binder is an economist at Princeton and a former vice chairman of the board of governors at the Federal Reserve] said. “If you can reverse that, then people start coming out of their foxholes and start putting their money in places they have been too afraid to put it.”

Yet these institutions are deeply intertwined with the American economy. When the financial system is in danger, it stops investing and lending, depriving people of financing for homes, cars and education. Businesses cannot borrow to start up and expand. [NYTimes]

The credit crunch recently has definitely been a problem. With it being harder to make money selling a mortgage off to other markets, banks are less apt to help people with money to purchase that house. However, as we realize what caused this, we’re also starting to see an aversion to 100% no-money-down lending. That will not change for the most part. While banks may be willing to lend again, they still won’t repeat at least one mistake and lend to those with no money to put into the mortgage loan.

With inflation poised to explode as a result of this recent bailout, people aren’t making more to compensate, and thus the pool of folks obtaining mortgage loans will continue to decrease. The homes on the market that are currently empty will not be filled up by magic buyers. The fundamental problem is that many people today cannot afford their first house if it means having to put money down.

It is important to remember that at the peak of the housing market, there were enough houses built for every everyone–owner-occupiers, speculators, and even their dogs–and no one worried much about the credit worthiness of the dog. In addition, even though builder activity has slowed greatly– they continue to build.

A number of factors have slowed the housing market. One, a slowing economy and rising unemployment has slowed demand. Household formation has slowed. Also, we need to remember that the housing market isn’t the only consideration- there is also the commercial market to consider. The demand for commercial space has slowed as well. Two, lending standards have tightened- not only are the speculators and the dogs out of the market, but many owner-occupiers who couldn’t afford homes are in trouble also. Three, and I believe most importantly, there has been a fundamental shift in the way Americans view their homes. It is no longer an “ATM-retirement account-road to riches”. It is now a place to live. Granite countertops are no longer an “investment.” “McMansions” no longer make sense. This is causing a fundamental shift in the way Americans use their money and their credit.

The goal of the bailout is purportedly to allow credit-worthy borrowers access to the capital they need. Even if that goal is achieved, remember that our pool of homes was built for both the credity-worthy and the uncredit-worthy. There is no longer a financing plan in place for the speculators, their dogs, and the uncreditworthy. Even many of those who were formerly creditworthy are losing jobs and are facing foreclosure. Those homes are going to remain vacant and continue to go into foreclosure- and that will continue the downward pressure on prices. For commercial interests, even the credit-worthy are going to have a hard time justifying projects in glutted markets.

Home prices WILL continue to fall- this bailout will not stabilize the market- and I doubt it will even slow the decline. The same will hold true for commercial projects. Both of these have been built to excess. In an economy where businesses are failing and downsizing, it is clear that there will be a huge excess capacity of commercial space. All of this will weigh on the balance sheet of lenders.

This bailout is a bandaid – and an expensive one. [twist]

This point isn’t lost to everyone. On CNN the other day, Ron Paul exclaimed how this $700 billion bailout won’t be enough and we’ll see the government crawl back for their next fix. Being already invested, like with the Iraq War, we’ll give it to them because it’s too late to turn back.

When it’s worse to own a home than rent one, it’s time to let the market work and let the foreclosure process happen. If an limb has gangrene, you can’t fix it by putting some Neosporin on it. Sometimes the truth hurts and we need to be prepared to deal with that.

Pingback by How Has YOUR 401k Performed With Regards To Year-To-Date Earnings (Or Losses) In 2008? | The Arizona Housing Bubble | Watching The Arizona Real Estate, Credit, Lending, And Mortgage Crisis From A Consumer's Point Of View
2008-10-06 13:26:07

[…] in the market, has come to pay itself back in gold after the adjustments hits, the Dow crashed, and the bailouts started picking up steam. But just like those who were shocked that a house could… LOSE […]

Fortunately many of the foreclosed homes are selling. In some areas the unfinished sub divisions have been bull dozed. I think we will eventurally get through the foreclosures. Soon as the last 5 years inventory has turned.