No Need To Fear, President Bush Is Here! Bush’s Solution To Subprime 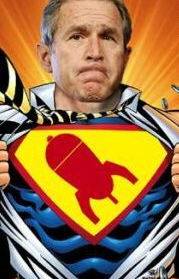 In the past, Bush has said “No” to a bailout, which has been relatively well recieved by those that feared that they would end up getting stuck with the bill for the housing bubble. However, while these are plans and propositions, it’s important to remember that nothing has yet been set in stone.

It will be interesting to see how things pan out once all the dust settles.

“He will also discuss reform efforts to prevent these kinds of problems from arising in the future,” the official told Reuters on condition of anonymity.

Financial markets have been in turmoil over the fallout from these credit problems for several weeks.

“No taxpayer money is involved”

People who have missed mortgage payments are now ineligible for FHA insurance. In the president’s plan, they would be eligible if they fall behind only because the amount they are required to pay each month increases, as is now happening with many mortgages issued from 2004 to 2006.

The officials said the administration can make the change without congressional approval, but other details will require legislation.

Officials expect that 2 million mortgages made to risky, or subprime, borrowers will adjust upward in the next two years, with a total value of more than $500 billion.

“They need to have had a good payment history up to the point of the reset,” said a senior administration official, who spoke on the condition of anonymity because the plan had not been announced. The official estimated that the change would allow 80,000 more homeowners to receive federally insured mortgages in 2008 on top of the 160,000 already projected to use the program.

The FHA does not make loans, it insures them. That helps lower the cost of mortgages for borrowers and makes the loans less risky for lenders. The agency has $22 billion in reserve to cover defaults. No taxpayer money is involved; the reserves are made up of premiums paid by borrowers.

Democrats in Congress and campaigning for president have criticized the administration for failing to act as the mortgage situation worsened, calling in particular for an increase in the number home buyers eligible for FHA loans. Consumer groups yesterday called the proposals a significant step in the right direction.

“This opens up a whole new channel to borrowers,” said Allen Fishbein, director of housing and credit policy for the Consumer Federation of America. “The administration has been under a lot of pressure from Congress to step forward with a plan for homeowners. A lot of the focus has been on liquidity and improving the situation for investors and lenders, and this is the first major step forward to address the problems of homeowners.”

When prices soared during the housing boom, homeowners essentially bet that they could sell their homes for a profit or refinance their way out of trouble if they anticipated problems with their mortgages. But when prices began to soften, as they have in many parts of the country, the refinancing option vanished for many.

The administration’s plan would make FHA loans available to people with worse credit histories, though with higher insurance premiums to cover the increased risk.

And the administration would ease a requirement that people refinancing into an FHA insured loan must have 3 percent equity in their houses. That way, people who are upside down on their mortgages — meaning they owe more than the house is worth — can still refinance into an FHA mortgage.

Bush also wants to raise the limit on the size of loans that the FHA can insure, which is $362,000 in states with high home prices. The proposal would move the limit to $417,000 in those high-price states, the same amount that federally chartered entities such as Freddie Mac and Fannie Mae can purchase. But the administration is not seeking to expand the ability of Freddie Mac and Fannie Mae to purchase loans, despite calls from some in Congress to do so.

“If we were to relocate a whole bunch of people after a disaster, you’d want to make sure they’re in safe housing,” Cohen said. “This is no different.”

Bush will also ask Congress to temporarily change the tax laws to make it easier for mortgage lenders to renegotiate loan terms with borrowers. If a homeowner is unable to make payments and the value of its house has dropped, its lender may want to renegotiate the loan so that the borrower owes less. A mortgage provider would, in many cases, prefer to reduce a $100,000 loan to $80,000 rather than have to foreclose on the house and try to sell it.

However, under current law, the borrower must treat the $20,000 reduction in the amount owed as income, increasing tax liability at the end of the year.

The Bush administration will ask Congress to alter the laws so that the $20,000 would not be counted as income.

“We view this as helping us through this bulge in the next 18 to 24 months,” said one of the officials, referring to the period when mortgage defaults and foreclosures are forecast to be at their highest level.

The administration will also seek to encourage nonprofit programs to aid people facing potential default, helping them refinance mortgages or take other actions before losing their homes.

Bush plans to instruct Paulson and Alphonso Jackson, the secretary of Housing and Urban Development, to research what else the government might do to deal with predatory lending, the implications of home loans being securitized and held by many different entities and the failure of credit-rating agencies to properly evaluate the riskiness of new mortgage products.

“It’s a tricky, tricky issue,” Lawler said. “As usual, the devil is in the details.”

[...] had covered earlier, that Bush had announced plans to help borrowers avoid foreclosure. At the moment it was rhetoric as we didn’t quite understand what would be required of [...]